I’ll explain in this article how to properly setup a SFTP server with chrooted users being only able to access their own directory, and authenticated by public keys or a password. This is a very useful setup, which can get a bit tricky especially with the permissions.

Unlike FTPS which is FTP over TLS, SFTP is a totally different protocol built on top of SSH. This especially means you don’t need any third-party software, since OpenSSH is installed by default on most linux distributions.

Each user will have his own personal directory which he’ll be able to access. But he will not be able to escape that directory and to modify anything else on the server. The root SFTP directory will be /var/sftp.

Run the following commands to create the /var/sftp directory and make sure it is owned by an administrator user (e.g. root)

Let’s start by creating a group in which we’ll put our SFTP users.

We can then create our users, assigning them to the newly created group.

And create their respective home directory.

And the same for Alice.

Let’s continue by setting up OpenSSH. Our goals are:

Start by opening the SSH configuration file, /etc/ssh/sshd_config. At the end of this file, add the following section.

In plain english, this would read:

Users in the sftp group should be locked in the /var/sftp/[username] directory and only be allowed to run SFTP command. Also, don’t allow them to create SSH tunnels (AllowTCPForwarding and X11Forwarding directives).

Save this file and reload OpenSSH using service sshd reload.

The next step is to allow Bob and Alice to authenticate on the server. I strongly suggest to use the public key authentication method, but for convenience I’ll provide the method to allow a standard password based authentication.

We’ll use the ssh-keygen command to create a key pair composed of a public key, that can be shared with anyone, and a private key that must be kept secret. The standard way to proceed is (taking Bob as an example):

Let’s now see how to generate a key pair. Note that this should preferably not be done on the server himself, since the private key has nothing to do there and should stay private (ideally, on Bob’s laptop).

The command will ask you where to store the keys (e.g., on Bob’s laptop, /home/bob/.ssh/sftp_key) and if you want to encrypt the private key with a passphrase. If you don’t, just hit enter. After that, two files will be created.

Allowing the key pairs on the server

To allow Bob’s public key to connect to Bob’s account on the server, simply create the file /var/sftp/bob/.ssh/authorized_keys and add his public key to it.

Also make sure the .ssh directory belongs to Bob (which won’t be the case if you ran the previous command as root).

If you want to disable password base authentication for your SFTP users (which you should if you plan to only use public keys), add the following line to our SSH configuration in /etc/ssh/sshd_config.

If you wish to use a password based authentication, you simply need to set a password for Bob and Alice:

In case you change your mind and want to switch to public key authentication later, you can:

Connecting to the server

With a graphical client

If you wish to connect using a standard SFTP client such as FileZilla or WinSCP, you first have to convert your private key in a different format called PPK. The process is very simple so I won’t bother explaining it, see this article instead. Once you have the PPK file in your possession, you can use it in your SFTP client to connect to the server. Here’s what it looks like in FileZilla. 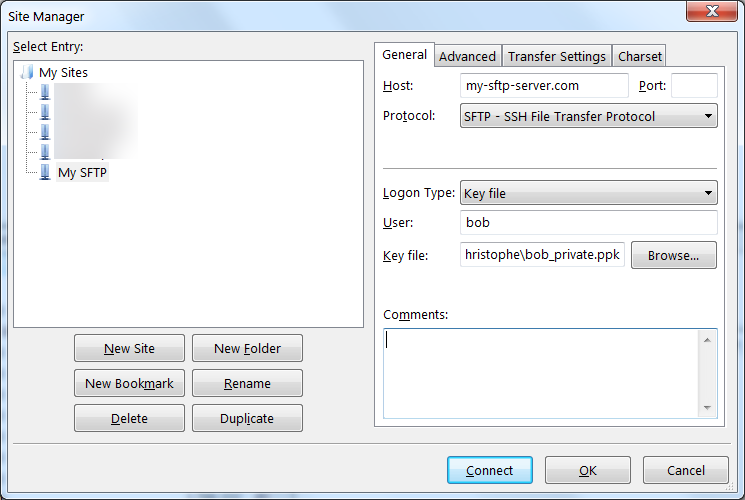 The configuration is quite straightforward. 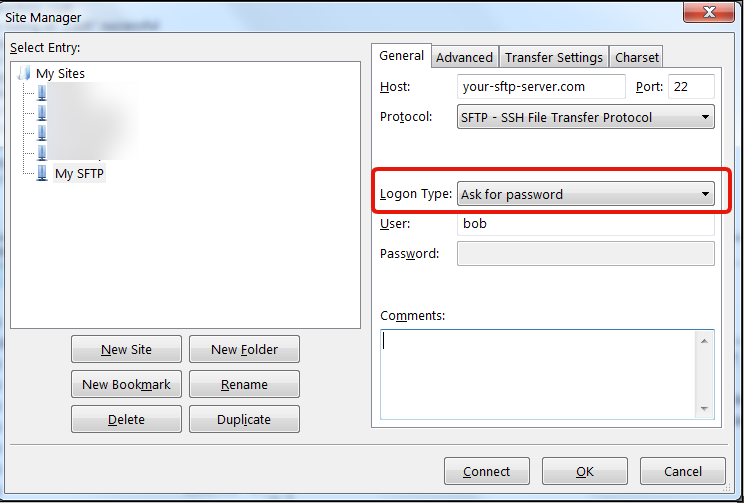 If you’re using FileZilla, I strongly recommend you don’t store the password in it, because FileZilla has the major drawback of storing your passwords unencrypted on your hard drive. If you need to save the password, use WinSCP and make sure to define a master password so that nothing gets stored in plain text.

From the command line

If you wish to connect via the command line (which can be very handy for automated processes, if you have no graphical interface at your disposal, or simply if you’re a nerd), you can use the following.

Note that sftp_key here is the private key, not the public key. After that, you can start listing / creating / uploading file.

Playing around with SFTP in the command line

Want more? You can take a look at this tutorial from DigitalOcean.

Making sure everything is as expected

Let’s make sure everything works as intended.

As you can see, even if we’re actually in /var/sftp/bob on the server, the SFTP client shows that we’re in the / directory, and we have no way to go up in the arborescence.

We can also try to SSH on the server: